BTW I've decided to be a full time vegan. Let's do this.

Posted by Valerie at 3:06 PM No comments:

Email ThisBlogThis!Share to TwitterShare to FacebookShare to Pinterest
Labels: Randomness

Hello, my lovelies! It's been a bit since I've done anything bookish. For my fellow bookworms, here's a guest post with the (I'm not gonna use lovely again...) marvelous D. S. McKnight! If you're like me, you've got a story inside you. Here's how to write that story while living your hectic life:

Hi!  I wanted to thank you for hosting me and my book on your blog.  For those who don’t know me, I’m D.S. McKnight.  I’m the author of the Young Adult Paranormal novel, Of Dreams and Shadow: Forget Me Not (Book 1).

Like so many writers, I have a full time job, a family and other commitments.
Finding writing time can be difficult.  I host a weekly feature on my blog called Self Published Sunday as well as review books for other authors.  It can get a little challenging to not over schedule my time.

I wish I had the ability to write in the evening but for the most part that doesn't work for me.  Once I start writing, it’s hard to stop.  My mind is still spinning possible scenarios long after I've gone to bed.

Fortunately, I have devised a solution that works for me.   I guess you could call it my thinking time.  While I’m driving or cooking or eating my lunch — I’m going over the plot to my story, looking for potential snags.  I think about my characters and how they might react to certain predicaments.  I make notes about potential conversations and situations.  I work out a lot of issues with my story before I ever sit down in front of my computer.  Then on the weekend, I close the door to the office, pull out my notes and start writing.

MPA girls, if you're on here, please.
Posted by Valerie at 9:00 AM No comments:

Interview with DD Chant, Author of the Broken City Series!

Hi readers! Today I bring to you an interview with DD Chant, the fabulously skilled writer of the Broken City series. The second book, Broken Truce, came out very recently, so I interviewed her about it. 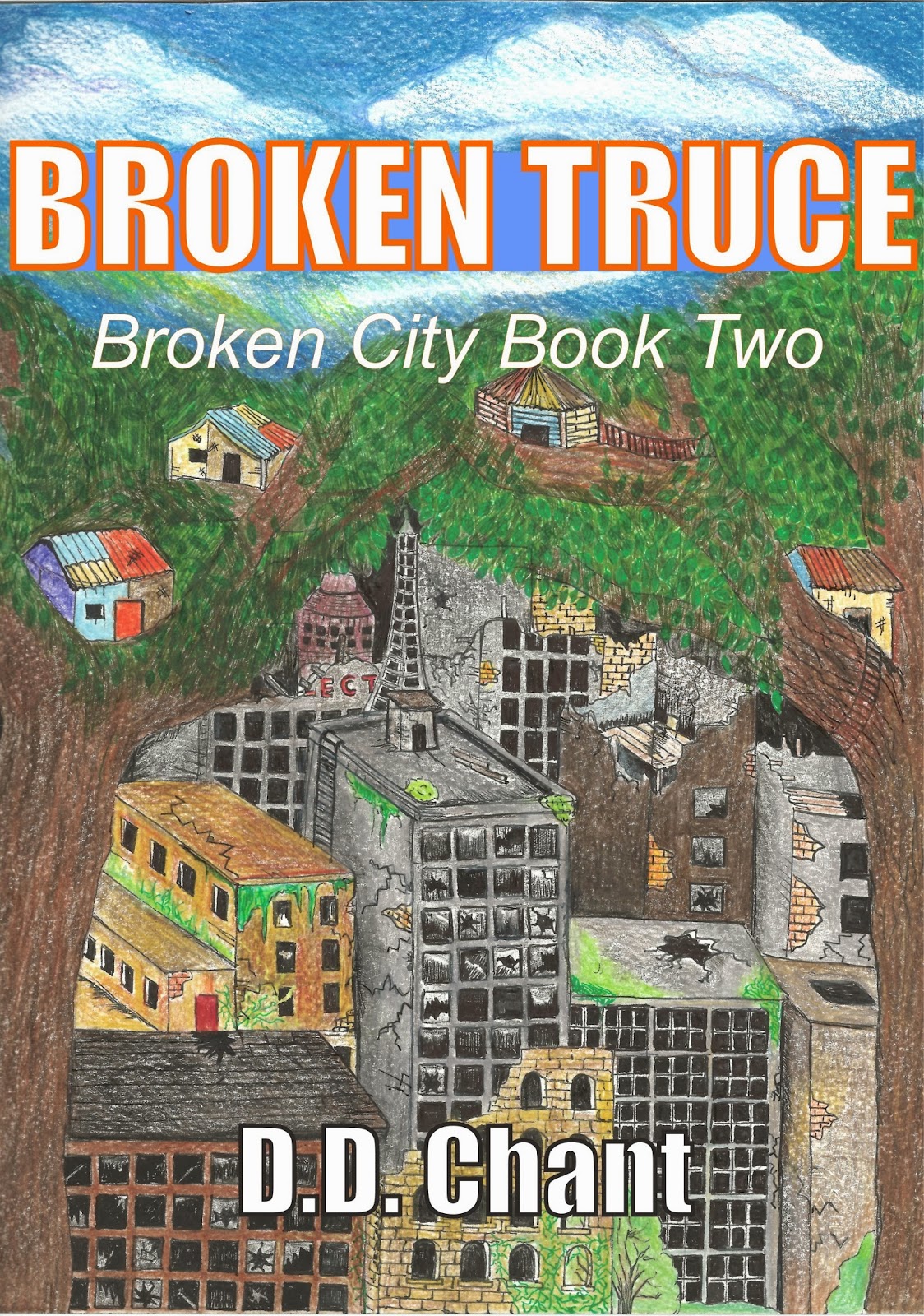 Life isn't turning out the way that Deeta thought it would. With the Lewises defeated and peace between the tribes, she'd believed that the dark times were in past.However troubles between the tribes continue, and the Andak council has selected Tom as their ambassador and chief spokesman to the other tribes.Deeta knows that there is still much resentment against the Andak, and that Tom is in danger every time he leaves the safety of Andak city.Struggling with her own complicated feelings against the tribe that she is now a part of, Deeta tries to ignore the changing attitudes growing within her.Then Tom is betrayed, and with the whole City thrown into great danger, Deeta finds that reality can't be ignored forever...

1. How long did it take you to write Broken Truce?

I challenged myself to complete the next books in all three of my series in 2013, so Broken Truce took me three and a half months to write. It was really great being able to go back to Deeta's world and expand upon the City and the different tribes.

2. What is the biggest obstacle Deeta and Tom must overcome?

In this book? The Lewises. In Broken City you hear a lot about the Lewises, but you don't really get to *see* them. In Broken Truce the Lewises take centre stage and Tom and Deeta find themselves in the line of fire.

3. What is the biggest piece of advice you'd like to give aspiring writers?

Never stop trying to improve. Even when people tell you that they loved your book, that your writing style is great, there is ALWAYS room to hone your writing skills a little more.
Also it's really important to be polite to your readers, even if they didn't enjoy your work. Everyone is entitled to their own opinion, but writing a book DOES NOT mean you're entitled to brilliant reviews.

4. How did you get inspired to write Broken City and Broken Truce?

It all started with a dream, just a scene with Deeta and Tom talking about Dec being taken. (Before you ask: no, I wasn't in the dream myself!!!) I couldn't stop thinking about it. The dream left me with so many questions, so I started writing and Broken City was born!

Broken Truce came as a surprise to me. Broken City was intended as a stand alone book, but I received so much support from readers and requests for another book in Deeta's world that I decided I would write another. Broken City had an open end, so there was plenty of room for another book, but I didn't just want to write one for the sake of writing one. I wanted to wait for a really good story line.

5. What is one thing you changed throughout the writing process of Broken Truce?

Broken City is narrated predominantly by Deeta, but only a third of Broken Truce is told from her perspective. You get to hear a lot more of Tom and his brothers in this book, particularly the twins, Cayden and Jayden.

6. What have you learned as a writer through this series?

Less is more. I like to explain how things are said when I'm writing dialogue, but those explanations get in the way and stop the writing from flowing. I'm slowly learning that good dialogue doesn't need any explanation. If your characters are well drawn and the reader will know how each character is feeling with out you having to tell them every five minutes!

This is a hard one! My aunt tells me I'm a lot like Deeta, and my sister says I'm very like Jan...

Which I'm pretty sure means I have a split personality!!!

Thank you, DD for your inspiring answers to my questions. I truly enjoyed this!
Please buy her book here.

Posted by Valerie at 6:15 PM No comments:

Little Things but in multiple directions... aka SNOW

Sometimes it's the little things that can make you feel absolutely miserable.
Posted by Valerie at 12:31 PM No comments:

I'm at AWG after three days of not getting a flight. FINALLY.

Note: This is not my final destination.

Also, I've blocked CWTV from my computer so I won't be able to have Reign and Carrie Diaries marathons.

I'm going back to monos. Tomorrow I want to do a milk mono or something liquidy. Honestly, I really just want to wash out my system.
Posted by Valerie at 2:22 PM No comments:

I didn't get into this math research program that I really wanted to get into. When I first found out, I started crying. Okay, maybe not that much, but still, I did.

Why didn't I get in? Am I too young? Too not smart enough? (Bad grammar, sorry!)

I got the highest score in the class on my history test. But I'd much rather have gotten into the program.

So here's to feeling not good enough.
Posted by Valerie at 8:11 PM No comments:

Resistance is something I hope I've built up.
Posted by Valerie at 11:12 PM No comments:

Honestly, she's my thinspo.
Posted by Valerie at 10:19 PM No comments: