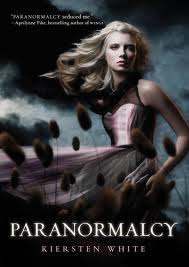 Summary from goodreads.com:Evie’s always thought of herself as a normal teenager, even though she works for the International Paranormal Containment Agency, her ex-boyfriend is a faerie, she’s falling for a shape-shifter, and she’s the only person who can see through paranormals’ glamours.
But Evie’s about to realize that she may very well be at the center of a dark faerie prophecy promising destruction to all paranormal creatures. So much for normal.

From the cover, you might be weirded out by this book. I mean, there's this blonde girl traipsing in a field of wheat and you think, WHAT?!!!! Isn't this some book about Demeter? You know, the goddess of agriculture?
Surprisingly, no it isn't. It's actually about this crazy awesome girl named Evie. And it isn't that crazy.

The main character, Evie, is sarcastic, hilarious, funny, clever, smart and a total teenager!!!!!!! She is awesome!!!!!!! Evie loves her high school TV show, has a BFF, has a crush or two and LOVES pink!!!! Are you kidding me, she wears pink all the time!!!! And did I mention she has a pink taser and a pink knife????? And zebra print boots? She is almost like any other teenager. Almost. Her BFF is a mermaid, she's crushing on a shapeshifter, and she's getting weirded out by her new so-called powers.

Oh, and the guys!!!!!!!!!! First there's Lend, the shapeshifter. He gets caught sneaking into the IPCA. Evie and him develop a friendship and end up crushing on each other. Totally awesome!!!!!!! I love him!!!!!!!!! But then again, who wouldn't? Who knew I could fall for a shapeshifter?
But then there's Reth, Evie's ex-boyfriend. He's your not so average fairy who has these melting brown eyes. And he's really, really sly. And hot. But with a different meaning. He literally warms Evie up. Love them both!!! Totally awesome love triangle... ish.