The Goddess Test, by Aimee Carter

Okay... here begins my review for this book. Got it? Any questions? No? Okay. Well, this book was pretty good! However, there was this one thing that really got on my nerves that made me give it this score...
3.99999 out of 5 stars! 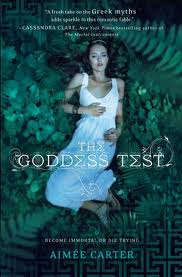 The Goddess Test, by Aimee Carter
It's out! Yay!
3.99999 out of 5 stars
Summary from Goodreads: It's always been just Kate and her mom—and her mother is dying. Her last wish? To move back to her childhood home. So Kate's going to start at a new school with no friends, no other family and the fear her mother won't live past the fall.
Then she meets Henry. Dark. Tortured. And mesmerizing. He claims to be Hades, god of the Underworld—and if she accepts his bargain, he'll keep her mother alive while Kate tries to pass seven tests.

Kate is sure he's crazy—until she sees him bring a girl back from the dead. Now saving her mother seems crazily possible. If she succeeds, she'll become Henry's future bride, and a goddess.


You might be asking, what's with the rating? Well, I'll explain that later. First things first, isn't Greek mythology awesome? I know, right? I was so happy that it was Greek mythology!!! Well, ish. Percy Jackson got me hooked to all things Greek, so here I am right now typing.

I love the main character. She's Kate, and she's epically awesome!!!!!!! She is such an amazing character!!! I mean she's sad, hurting inside, and kinda new to Gods. That's why I like her! I mean, she actually gave me a reason to learn what she was learning!!! And, besides, with a name like Kate, how can you not like her?

James. He was, well, interesting...
Well, he interested me. And once you learn his true identity, the questions really start pouring...
(I have too many to post). Let's just say even before then, I was interested in him...
Quick question James, are you single?
Haha... :)

Well, that aside, it was a pretty spectacular book!!!!!!! Definitely worth the read. Love, love, loved it!!! So, read it! And rant about Henry's absence of contractions!!!!!!! I mean, he really needs to learn to use them. Kate just might dump him for it...
I would. :P
Posted by Valerie at 4:45 PM