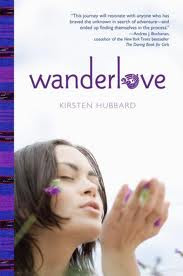 Wanderlove by Kirsten Hubbard
Release date: March 13 2012
Recieved from: Netgalley
Summary from Goodreads:It all begins with a stupid question:

Are you a Global Vagabond?

No, but 18-year-old Bria Sandoval wants to be. In a quest for independence, her neglected art, and no-strings-attached hookups, she signs up for a guided tour of Central America—the wrong one. Middle-aged tourists with fanny packs are hardly the key to self-rediscovery. When Bria meets Rowan, devoted backpacker and dive instructor, and his outspokenly humanitarian sister Starling, she seizes the chance to ditch her group and join them off the beaten path.

Bria's a good girl trying to go bad. Rowan's a bad boy trying to stay good. As they travel across a panorama of Mayan villages, remote Belizean islands, and hostels plagued with jungle beasties, they discover what they've got in common: both seek to leave behind the old versions of themselves. And the secret to escaping the past, Rowan’s found, is to keep moving forward.

But Bria comes to realize she can't run forever, no matter what Rowan says. If she ever wants the courage to fall for someone worthwhile, she has to start looking back.

Kirsten Hubbard lends her artistry into this ultimate backpacker novel, weaving her drawings into the text. Her career as a travel writer and her experiences as a real-life vagabond backpacking Central America are deeply seeded in this inspiring story.

There's something about this book that's totally different from any others. It's Sarah Dessen with a mix of something serious and tons of travel. Not only that but it has ART!!!!!!!!!!! Totally beautifully drawn art!!!!!!! Now that makes me want to pick up my pencil and draw. Even if I'm not good.

Plot: I love, love this plot! It's a totally awesome plot with a lot of travel. I like how it focuses on traveling and healing. Bria has gone through a lot. She gave up art. Her ex-boyfriend was disgusting. So now she's in Central America. There's something about this plot that is totally different. There aren't many twists or curveballs, but it seems to suit the book. Instead it focuses on something a lot more serious. Finding yourself, looking back, and accepting. Well, and travel... and art
That's the YA first plot I've seen that's more serious. And I like it. A lot.

The Characters: These are not your average YA characters. Well, not exactly, anyways. Bria is this awesome artist who made not breaking up with her boyfriend earlier. Because of him, she gave up college and her art. And started to travel. I like her because she is such an awesome person! She thinks about her mistakes and opens up. Kirsten Hubbards gives you these little bits through out the book about her past so you can put the pieces together. She really got to me and is totally relatable. Not only that, but she's just totally cool, creative, and really, really a likeable character.
Rowan. I like him. A lot. He's not your typical bad boy. For one thing, he was a bad boy. Was. So now he's trying not to think about the past. Instead, he's afflicted with wanderlove. Not wanderlust. Just running away from his mistakes. What's so awesome is together, Bria and Rowan have these awesome conversations. They're serious, true, and at times wistful. Besides, he's looks good. Black hair, dark blue eyes, what's not to like???
Starling is Rowan's older sister. She's really protective, fierce, and super nice. She really looked after Rowan when he made mistakes, quitting her job helping poor people in Central America. I really liked her character. She was well written and well described.
... and energetic and hilarious and... you get the point!

Also, there's not a cliffhanger!!!!! A totally cool and sweet ending that isn't crazily cliffhanger related! Instead it's perfect. Perfectly written. Definitely my favorite ending!!!!!!!!

Wow, I used to love Anne of Green Gables when it came on television :)

Me too. I loved everything Anne of Green Gables.