The Summoning, by Kelley Armstrong

I'm disappointed. I started this book thinking it would be my next favorite book. I thought it would be the bomb. But it really wasn't. At least not for me. It wasn't hard to get through, but it just didn't click. It was just okay, but that's not enough. So 3 out of 5 stars. 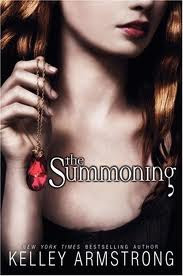 The Summoning by Kelley Armstrong
Published 7.1.2008
3 out of 5 stars
Summary from Goodreads: After years of frequent moves following her mother’s death, Chloe Saunders’s life is finally settling down. She is attending art school, pursuing her dreams of becoming a director, making friends, meeting boys. Her biggest concern is that she’s not developing as fast as her friends are. But when puberty does hit, it brings more than hormone surges. Chloe starts seeing ghosts–everywhere, demanding her attention. After she suffers a breakdown, her devoted aunt Lauren gets her into a highly recommended group home.

At first, Lyle House seems a pretty okay place, except for Chloe’s small problem of fearing she might be facing a lifetime of mental illness. But as she gradually gets to know the other kids at the home–charming Simon and his ominous, unsmiling brother Derek, obnoxious Tori, and Rae, who has a “thing” for fire–Chloe begins to realize that there is something that binds them all together, and it isn’t your usual “problem kid” behaviour. And together they discover that Lyle House is not your usual group home either…

Once upon a time, there was a book called The Summoning. And it was disappointing. Anyways, it had a very boring plot. Well boring compared to other YA plots. There weren't many surprises, barely any twists and about zero turns. If there were, they weren't that significant. I wasn't immersed in the plot. If anything, this plot isn't the strongest part of the story. Oh well. It had so much potential, but it was ruined.

Chloe. She was not exactly my favorite protagonist. She was just okay. Not hated by me, but not loved. It's like she wasn't there. Her presence was not noticed, even though she was the main character. It's kind of sad for me. How could I not even have an opinion on the main character?
She's short. That's kind of a trend going on in YA books, and I don't mind reading about short people. Well, that's because I am one. Anyways, that made her more relatable. If I can't say what I think about Chloe as a character, at least I can say she's relatable!

What surprised me was the lack of romance. This book is shelfed with romance 84 times. But I really didn't find any...
This book was hinting at possible relationships, but I really couldn't find any real ones. I really wanted a guy to add to the crush list, but I guess I have to wait for another book. Basically, this book needed more love because love makes the world go round!
Okay...

However, the Lyle House didn't seem normal... it seemed like it was in a different world, a parallel universe far, far away. I didn't feel like the Lyle House could actually exist. It's not believable or probable at all. It was a kind of nice concept gone wrong. No offense intended, of course. This is just how I feel about The Summoning.

I didn't dread this book but I didn't hate it either. So I'm neutral. I'm probably not going to pick up the sequel, but maybe. Once upon a time I thought The Summoning might be good, and in the same world it was. I might not find that world, but I know it's not this one.
Posted by Valerie at 6:14 PM

Email ThisBlogThis!Share to TwitterShare to FacebookShare to Pinterest
Labels: ghosts