When I first saw this book, I was reluctant to read it. So I waited about two months before actually getting the book. Then I waited another week or so to actually start reading it. And that was a huge mistake!!!!! This book is one of those books that you have to read now! You can't wait for it, you absolutely must grab it. In other words, 5 out of 5 stars. 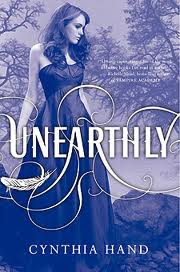 Unearthly by Cynthia Hand
Published 01/4/11
5 out of 5 unearthly stars!
Summary from Goodreads: In the beginning, there's a boy standing in the trees . . . .

Clara Gardner has recently learned that she's part angel. Having angel blood run through her veins not only makes her smarter, stronger, and faster than humans (a word, she realizes, that no longer applies to her), but it means she has a purpose, something she was put on this earth to do. Figuring out what that is, though, isn't easy.

Her visions of a raging forest fire and an alluring stranger lead her to a new school in a new town. When she meets Christian, who turns out to be the boy of her dreams (literally), everything seems to fall into place—and out of place at the same time. Because there's another guy, Tucker, who appeals to Clara's less angelic side.

As Clara tries to find her way in a world she no longer understands, she encounters unseen dangers and choices she never thought she'd have to make—between honesty and deceit, love and duty, good and evil. When the fire from her vision finally ignites, will Clara be ready to face her destiny?

Unearthly is a moving tale of love and fate, and the struggle between following the rules and following your heart.


There's something about this book that is unbelievably unique. Maybe it's the part about angels, the fact of knowing your destiny, or already knowing you're an angel. Maybe it's Clara, who is pretty special... literally. Or maybe it's just me. Still, you can't deny that this book is different. In a good way.

This love triangle is utterly amazing! I absolutely loved it! You have Tucker, your charming bad boy, and Christian, who is my favorite. This triangle is epic! I felt myself torn between both of them. Whenever Christian was there, I was Team Christian! When Tucker was there, I loved Tucker. But still, I just liked (loved) Christian a little more, so I am officially Team Christian!!!!!
And Christian has a secret that you find out... which is so surprising!!! It's absolutely mindblowing! No kidding!

There's also this friend triangle... kind of. Clara has these two totally awesome friends that are really opposites. Wendy and Angela. Angela and Wendy. I'll just say one thing: I like them both. Even if Wendy likes playing matchmaker and Angela too. Who cares if I can't like both of them? They're both great friends. Can you guys be my friends? I'll give you cookies! Anyways...

This plot is worth gushing about for eternity! You have tons of side plots, tons of surprises and tons of epic events! Still not convinced? Let's just say I started gasping and had to stop reading for a bit... really! For real! I was so surprised that I had to give myself a time out. Twists, turns, and loops. I loved it!!!! So, so awesome! If anything, this plot is better than almost any other plot ever. Such astounding events... amazing revelations... just read this book!!!!!!!!

Then there's this whole thing called voice. I loved this style of writing. So exquisite. I almost wanted to stop reading so I could save it for later. But I couldn't. It was too good to put down. It was so good!!!!!!! Wow... I'm still ranting!

Then there's Clara. She's pretty relatable, considering she's a quarter angel and has wings. She's smart, clever, nice, and pretty awesome... except one thing. She loves Tucker! Notice I wrote love. Anyways, other than that she is an awesome protagonist. Even I can't do better. That's saying a lot about her...
I'm glad she's a blonde... but not exactly anymore. But that really doesn't exactly have to do with anything...

Just read this book!Fall in love with Christian! Or Tucker! Just read it! And start begging for the sequel...
Posted by Valerie at 1:30 PM